Find this article at:
go.ncsu.edu/readext?457996
— Written By Colby Griffin

The mild winter season this year caused many plants that should have had at least another 4 weeks of rest to emerge early from their winter sleep. Several plants you may have noticed that bloomed early are Forsythia or yellow-bell, eastern redbud, flowering quince, ornamental cherry, and ornamental pear.

Of the plants mentioned only one stands out with the smell of rotten fish – the ornamental pear. Most ornamental pear trees originate from Pyrus calleryana or the callery pear. This pear is native to China. As with many plant species that originate in the Orient, it tends to spread around the landscape with ease. Birds, especially starlings enjoy eating the small fruit that develops and in turn scatter the seeds as they fly. The oldest cultivar of ornamental pear is ‘Bradford’ which made its debut into our landscapes in the early 1960s. 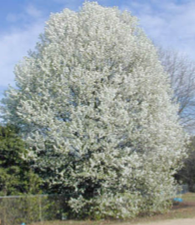 The parent species of Callery Pear.

This tree was planted in abundance due to its ability to withstand many types of soil conditions, its maroon fall color, rapid growth rate and abundance of white flowers in spring. However, Bradford pears have a horrible structural shape to them. The crotch angles of the limbs are extremely narrow which makes them susceptible to breaking in moderate wind and ice storms. The Bradford pear is sterile and not able to bear viable fruit. However, later cultivars such as ‘Clevlend Select’ and ‘Chanticleer’ were bred that had wider crotch angles. Unfortunately, these were able to cross-pollinate with ‘Bradford’ and viable fruit were formed.

While looking around the landscape in early spring it’s easy to spot the escapes of these trees along roadsides and fencerows. To make things even worse the invasive offspring of these ornamental pears have large thorns along its limbs making removal even more difficult. I would suggest refraining from planting this tree in your home landscape. Unless, of course, each spring you want to be the neighbor who’s yard smells of last weeks’ garbage.

Some alternatives to the noxious callery pear include flowering dogwood, kousa dogwood, fringe tree, and Carolina silver bell. Cornus florida or flowering dogwood grows to 15 – 25 feet in height and has 4-inch white bracts in early April. 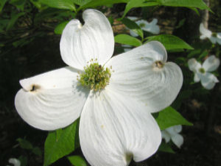 The white bracts of flowering dogwood. 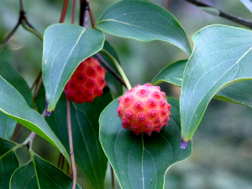 The fruit of Cornus kousa dogwood.

There are also pink and red color cultivars. Flowering dogwood has red berries that attract birds and has maroon fall color. Cornus kousa dogwood blooms two to three weeks after flowering dogwood and has pointed white or pink tapered bracts, red fruit in late summer, and scarlet fall color. It can reach upwards of 25 feet tall and grows best in sun to partial shade. Chionanthus virginicus or fringe tree is a showstopper with loose clusters of fragrant white flowers that cover the entire tree in spring. Fringe tree is adapted to a variety of growing conditions and prefers moist, well-drained soil. 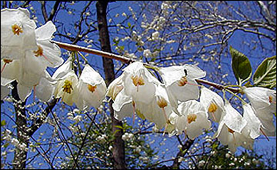 Halesia tetraptera or Carolina silverbell blooms in late spring with white, bell-shaped flowers that hang in clusters on year-old branches. Upon maturity, Carolina silverbell can reach over 30 feet in height, so its smaller cousin of two-winged silverbell, Halesia diptera which reaches around 25 feet would be better suited for a smaller area. Both are outstanding trees in the landscape that thrive in well-drained soils rich in organic matter. Regardless of what you choose to plant within in your home landscape be sure to always assess the site in where you intend to install shrubs and trees. It is essential that you give plants the adequate space they need to grow and flourish.

Colby Griffin is the horticulture agent for Edgecombe County Cooperative Extension. If you have any questions about this article or other gardening issues, he can be reached at colby_griffin@ncsu.edu or 252-641-7815

We also have a few other email lists you can subscribe to.